Switching Careers Towards Web Development – How to Become a Web Developer?

Hello Voucherify blog readers, in my first ever post I'd like to share my story of becoming a web developer. Read on if you want to learn what made me change my mind and how to learn web development to succeed.

It was already night when my friend and I were coming back from the set, where we worked as production managers. There were only the director and cinematographer left on the set because they still had a few details to finish off.

We drove an old Nissan Micra loaded with film equipment and catering from the set. We had to get to the city center, where we stayed overnight with the director's friends. About halfway through the city, we were caught by a snowstorm. Then the windscreen wipers stopped working, so we drove almost blindly, slipping on bends from time to time.

We finally got home, but only to realize that we don't have the key to the apartment – the director had it, and he would get home in a few hours.

I felt as if I’ve gotten a life sentence.

Of course, it's not like I didn't know what a computer is until I started working in the IT industry. I was always up to date with new technologies and liked learning new things.

In elementary school, I was interested in creating very simple web pages, which consisted mainly of tables. In the meantime, I also ran a lot of blogs on Blogspot and I was on the Internet before it became a collection of only four portals.

Creating such simple web pages was a purely technical thing for me, but not measurable at the time. At school, I couldn't make a horizontal square, and I had fewer CS classes than religion. It's just that, according to the education system, I was an idiot in technical matters, and that's what I was told.

Mathematics? Where was I supposed to calculate something while making this page?

That's why I’ve always considered myself a more creative person, and because of that, I chose the standard University, not the University of Technology. The Internet and computer were more about entertainment than about my future career.

In high school, however, I got interested in making films and I thought maybe it would be more interesting to go that way.

Spoiler alert, no it wasn’t.

After graduating from Film Production Faculty, most of my friends went to Warsaw to work there "in the movie industry", because "movie" happens mainly in Warsaw and photos in other cities happen rarely. Already, at the end of my studies, I knew that I didn't want to work in this industry – I had my attempts in it, which I didn't want to repeat.

Here, I am reminded of a certain similarity between shooting a movie and coding because the film script has probably one of the most demanding text formats I have ever encountered. 12-point Courier font, specific line spacing, margins, another formatting for dialogues. All that is missing is information about the wrong symbol on which line.

It took me a few minutes to invent a new career path, but it took a few years to get started. The first step was to understand that all my previous steps were not a waste of time, but a path that would lead me further. That sounds silly, but it was necessary for me if I wanted to keep the right balance. The second step was to find some kind of external motivation that would force me to learn. I managed to apply for the project, whose main goal was to finance programming courses as part of a career change.

Perfect – I applied and filled in a very simple knowledge test...which I immediately failed.

Suddenly, after a month, I got the information that I made it because several people resigned. Then I found a Bootcamp that allowed me to learn new technologies faster.

Unfortunately, it's not like it's because of Bootcamp that I'm here. I would love that to be the case, but the Bootcamp – at least for me – gave me a reason to learn, but it was not an end in itself. It helped me to learn regularly when I had to reconcile new learning patterns with my previous job. It's not like I knew everything after it.

After the Bootcamp, I only got a better idea of where to look for answers and what questions to ask. And that's what I wrote on my job application.

And after three hours, I got it.

I guess that I received the biggest support from my coding friends. I could ask them about code problems and I didn't feel they were looking down on me.

The same way, the people closest to me helped me a lot during this time. Sometimes it's hard for me to explain what I'm doing (and now it's even harder for me to explain it), but thanks to them I have much more confidence.

Also reading similar stories and following people from the industry, to get acquainted with this new, specialized world, also gave me a lot.

A great example of an educator for me is Tania Rascia, who I started following more or less when I started the Bootcamp. Her approach to learning, constant development, and her life story have also supported me in my work.

My four favorite profiles which I think are worth following in terms of web development:

It's just been 2 months since I started working at Voucherify and I know now that it was a great decision. During those two months I had the opportunity to learn a lot, but most of all – I could ask a lot of questions.

Voucherify has a great product on board, but in my opinion, it's an even better team, where everyone can feel at home quickly, no matter what stack they have. 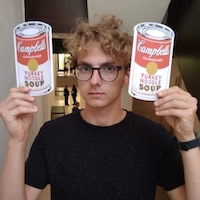 Piotr Gacek
Web Developer with a keen eye for detail. Interested in ways how the Internet and social media influence society. Digital native.
More articles by this author

and we need you help!
See offers